June 2010 issue of Wavelength is now available in the newsletters section.

While the majority of amateur radio operators appear to be of the male variety, it is not confined exclusively to this sex. There is an increasing number of ladies joining the forces and making a name for themselves in this field.  Organizations exclusively for YL operators have only recently come into existence.

The Ontario Trilliums evolved out of a group of YL operators discussing the possibility of a Canadian YL Club at a dinner meeting of the Scarborough Amateur Radio Club.  No formal action was taken at that time, but the girls began to meet on the air on Saturday afternoons.  They called themselves the Ontario CW YL net.

Eventually the YLs met for the purpose of formally organizing a YL radio club.  Jan Burgess, VE3BII, was elected the first president. Other members of the executive were Doree Butler, VE3EUV, Jean Evans, VE3DGG, Ivy Smythe VE3EZI, Doris Cody, VE3BBO, and Doris Taylor, VE3FRN. They decided to call themselves The Ontario Trilliums. The call letters VE3TOT were applied for and received. A constitution was drawn up. The aim of the Club was to further the fellowship and activities of women sharing the common bond of amateur radio.   All licenced women amateur radio operators were eligible for membership, and ladies simply interested in amateur radio would also be welcomed.
In order to create a greater interest in the Club, as well as to publicize the organization, a TOT certificate was made available. With the help of some of the OMs around the district they got established financially, and also acquired their own QSL cards.

In June, 1966, the Trilliums, not to be outdone by their male counterparts, took part in the A.R.R.L. field day.

The 1967 elections saw the first executive member outside of VE3 land elected.   She was Chris Weeks, VE1AKO. The Club again took part in the annual Field Day, and in a very enthusiastic manner manned three complete stations.

In the past the Trilliums have taken an active interest in the CNIB hams.  As their Centennial project it was decided that they would like to branch out into a truly Canadian organization.  After some thorough investigation, meetings via amateur radio and questionnaires, the Canadian Ladies Amateur Radio Association (CLARA) was formed in September, 1967.  This has turned out to be a National organization, with members from every province in Canada participating.  The President of CLARA is Chris Weeks, VE1AKO, with executive members Donez Booth, VE6ATH, Jan Burgess, VE3BII, Marion Inkman, VE7BQV, Sally Ranti, VE2KO, Bubbles Timlick, VE4ST, Vera Hines, VE8HH and Thelma Woodhouse, VE3CLT.  No doubt in the next few years we will be hearing a good deal about CLARA.

The Trilliums have not “closed up shop” but are continuing as an affiliated club of CLARA.  The executive of the Ontario Trilliums are encouraging their members to become part of the National Organization. 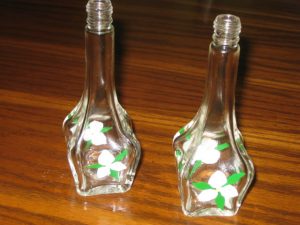 Handicraft art produced by an unknown member of the TOTs.   From the collection of Gordon Hogarth, VE3CNA, Toronto, Ontario.

The Canadian Amateur Radio Operators’ Association began publishing its Official Journal called “XTAL” (ham nomenclature for crystal, a frequency determining device used in both transmitters and receivers) in March of 1935.  CAROA wished to offer a publication that exclusively expressed the views of Canadian Radio Amateurs and went to some length to assure everyone that it fully supported the American Radio Relay League (ARRL) then present in Canada as the Canadian Division of ARRL, and was a member of ARRL and also the Radio Society of Great Britain (RSGB). “XTAL” was read both nationally and internationally.

“XTAL” appears to have been published from March, 1935 up to the Canadian declaration of war (WWII) or September 1939, and appears to have resumed publishing near the end of WWII in June of 1945 and continued up to December 1950. The final date is taken from a column by Bill Choat, VE3CO published in The Ontario Amateur, Vol. 1, No. 2, June 1966 pp 17 & 18. (See Radio Society of Ontario section of website.)

When Canada entered WWII in September, 1939, all Canadian Amateur Radio Operators were ordered off the air officially by the Government of Canada.

It is interesting to note that Canadian Amateur Radio Operators (as were other Amateurs world wide) were most anxious to resume operations as soon as possible once the war ended in August of 1945. Amateur frequencies were restored gradually and you may read about that in some of the issues of “XTAL”.

END_OF_DOCUMENT_TOKEN_TO_BE_REPLACED

On May 22, 1957, the Letters Patent incorporating the Ontario Amateur Radio Federation, Inc. was issued to Noel B. Eaton, VE3CJ, D. Alan Page, VE3XZ and A.K. Meen, VE3RX ( then VE3DAR ).  The organizational meeting of the Corporation was held in October, 1957, with Noel Eaton elected as the first President.  The by-laws of the Federation as then established provided for membership by recognized amateur radio clubs only, these clubs being represented at meetings of the Federation, each by a Trustee and an alternate Trustee. The clubs forming the original membership of the Federation were Oakville, North Shore, Metro, Westside, Wireless Association, and Nortown.These were subsequently joined by Peterborough, Brantford, Niagara Peninsula, Scarboro, Skywide and Hamilton. The Federation had annual and semi-annual meetings of the Trustees, and monthly meetings of the Executive Committees.   Considerable progress was made in the area of television interference, both diagnosis and treatment, and in submissions which ultimately resulted in the substantial improvement of television sets by the incorporation into all sets of a high pass filter, beginning with the 1961 model year.

At the semi-annual meeting of the Trustees in the fall of 1961 the Executive was authorized to explore the possibilities of amalgamation of the Ontario Amateur Radio Association and The Ontario Amateur Radio Federation, Inc. In April, 1962 as a result of these negotiations the two organizations were joined and the name was changed to Radio Society of Ontario, Inc. In the fall of 1962 the society sponsored the A.R.R.L. Ontario Section Convention.

In March, 1963, a By-law was passed which converted the membership in the Society from Clubs to individuals, and divided Ontario into districts as administered by D.O.T. (Department of Transport), the districts having representation roughly proportional to the amateur population of each district.  Thus Clubs were no longer members with voting privileges, but rather might become affiliated clubs provided 50% of their voting members were members of the Society.

Membership has grown year by year, and at the present time stands well beyond the 1000 mark.

Thanks to Ralph Cameron, VE3BBM and John Gilbert, VE3CXL for providing the December 1966 and 1985-1986 issues of The Ontario Amateur.

END_OF_DOCUMENT_TOKEN_TO_BE_REPLACED

The "Wireless Association of Ontario" was formed in 1912 and continued until around 1955 and meetings were held in the Electrical Building at the University of Toronto.   A radio course was offered and a station was established on 40 meters  ( 7 Mhz ) with a power of 4 watts using the call sign 9BZ followed by NC9BZ.  Contacts with similar stations in Europe and Australia were reported.   A call sign of VE3KI was mentioned in "Varsity" the student and University newspaper of February 1935.