The Founding of the Scarborough Amateur Radio Club, Incorporated

It is worth considering that no organization starts by itself, rather it is created by external forces in response to a want or need and is shaped in greater or lesser ways, for better or worse, by the evolving environment in which it finds itself.

For centuries, man had wished to communicate over short, medium and long distances and messages were sent, received and relayed by semaphore, flags, messengers, drums (jungle) and smoke (plains Indians) with varying degrees of reliability and success.  Clearly, there was a very strong and enduring communications need to be met.

The Renaissance saw the emergence of The Scientific Method resulting in a number of discoveries in the fields of electricity, magnetism, electromagnetism and the manufacture of wire insulators, and batteries that allowed man to control and utilize their properties for important and useful work.  In a very few words: signalling by electricity over long distances became a reality during the 19th century.  Here are a few examples of experiments and achievements of that era:

Harrison Gray Dyar and his brother, Joseph Dyar, constructed a single, bare, iron wire line over a half a mile in length and successfully sent a message over it.   Their work was discontinued by threats of prosecution for “Conspiracy to send Secret Communications in advance of the mail.”

Samuel Finley Breese Morse formed the concept of a single-wire electric telegraph while returning home from Europe by sea where he met Charles Thomas Jackson of Boston who was well schooled in electromagnetism and demonstrated his work to Morse.

Albert Vale provided insight, money and important work with Morse in the development of the on-off code that would bear Morse’s name.

Professor Leonard Gale who taught chemistry at New York University and provided the answer to the great problem of sending a message through a wire more than a few hundred yards in length.

William Cooke and Professor Charles Wheatstone formed a partnership and patented the electrical telegraph in May of 1837 and provided the Great Western Railway with a 13 mile stretch of telegraph.

On May 1, 1844 a telegraph line was completed between Baltimore, Maryland and Washington, D.C. and a message was sent proving that the line worked.

On May 24, 1844 the telegraph line was officially opened between Washington D.C. and Baltimore, MD and Samuel Finley Breese Morse sent the historic message: “What Hath God Wrought?”

In May, 1845 the Magnetic Telegraph Company was formed to radiate telegraph lines from New York City to Philadelphia,  Boston, Buffalo N.Y. and the Mississippi.

1847 Morse receives his patent for the telegraph in Istanbul.

The Morse telegraphic apparatus was officially adopted as the standard for European telegraphy, with the exception of the United Kingdom (with its extensive overseas empire) who kept the needle telegraph of Cooke and Wheatstone.

James Clerk Maxwell formally postulates the existence of electromagnetic waves.  This work was confirmed by Hertz in 1888.

Heinrich Hertz demonstrated that one could produce and detect electromagnetic radiation as described by Maxwell in 1864.

Hertz dies,  his papers are published and come to the attention of Guglielmo Marconi who begins experiments in communication by Hertzian Waves or electromagnetic radiation.

The Wireless Association of Ontario is formed by about 50 persons who were interested in “wireless” and meetings were held at the University of Toronto, the YMCA and Ryerson. Wireless, or radio had captured the imagination of the general public it was not long before the persons known as “Amateurs” or “ Experimenters” met to exchange information, news and ideas.  Amateurs designed, built and operated private radio stations in their homes and communicated with each other “over the air” or by wireless.

The American Radio Relay League is founded as the national association for Amateur Radio in the U.S.A.

The Canadian Amateur Radio Operators’ Association is founded and publishes the first issue of its magazine, “XTAL”, in March of that year.

From about 1912 to 1939, Amateur Radio Stations sprang up in Canada, the United States of America and in many countries around the world.   Amateur Radio became well organized locally and saw the founding of Radio Clubs, nationally with the founding of groups to represent the interests of their members with their governments,  and internationally to obtain and retain radio spectrum in which to operate.

Radio Amateurs or “Hams” came to know one another either on the air or by personal contact at the meetings of these groups.

A small group of Radio Amateurs that lived in Scarboro near the intersection of Kingston Road (Highway 2) and Midland Avenue would get together and, in a car borrowed from Ken Tripp’s ESSO Station on Kingston Road just West of Midland Avenue, would travel to downtown Toronto to attend meetings of the Wireless Association of Ontario.

World War II was declared by Canada in early September 1939 and everyone who held a licence in the Amateur Radio Experimental Service received a notice from the Government of Canada instructing the “Hams” to go off the air immediately.

There was no more Amateur Radio for Canadians until some months after the end of World War II that ended in August of 1945.  Then the war was over and those who returned home were anxious to resume on-the-air activities.  Over time, radio spectrum was released to the “Hams” and the “Hams” were back on the air again.

THE FOUNDING AND FOUNDERS

Soon after WWII, amateurs living in the vicinity of Kingston Road and Midland Avenue would get together and drive to meetings of the Wireless Association of Ontario held in the evenings at the University of Toronto.

Ken Tripp Sr. was the owner of Ken Tripp's ESSO Station on the North side of Kingston Road west of Midland Avenue and his son Ken Tripp Jr. later VE3DGM and his "ham" friends would borrow a car and together would drive to the evening meetings of the Wireless Association of Ontario.  During the drive, conversations took place about starting  a local club and beginning about December 1945 and into January and February 1946,  hams throughout East Toronto and Scarborough were contacted.

The Club's surviving founder, Vince Graham, VE3AXB confirms in an email dated February 19, 2011,  that the following account of the founding as written by Wilf Brown, VE3AJO on the occasion of Canada's Centennial Year, 1967 is accurate and conforms to Vince's memory of the event.

Wilf is the first known Club Historian and his verbatim account follows:

THE FORMATION OF THE SCARBOROUGH CLUB

One spring evening in the early part of April 1946, five hams sat in the car of Ken Tripp VE3DGM, after attending a meeting of the Wireless Association of Ontario.  Suddenly the idea arose – why not form a club in Scarborough.

The meetings continued for one year and by this time Wilf, VE3AJO had joined the group.  By the fall of 1947 the Club was expanding and through the help of VE3AZC (Frank Stewardson), Oakridge Public School was procured as a meeting place.

Abut this time Barney, (VE3DVA)  now VE3MB, came into the picture.   The Club was showing growing pains again and Barney suggested we move to his recreation room at the rear of his basement and many enjoyable meetings were held there.

Quite a bit of carpentry work was added to make more sitting room and one night all the club turned out to paint the room.  A few enjoyable Christmas parties were also held there.

The first Field Day was held at the old Eatons’ Boys camp just west of the radar plant.  One field day at the Bluffs, due to heavy rain and mud, everything was hauled in and out on planks.  What Fun!

This completes roughly the story to 1967 – Centennial year.

The above account of the Founding of Scarborough ARC is the result of reviewing historical records in the Club Archives and consultations with the sole, surviving founder, Mr. Vincent Graham, VE3AXB.  Over the years of my membership in the Club, I have heard mention of "The Original Five" from time to time which makes the account of Wilf Brown, VE3AJO prepared in 1967 (Canada's Centennial Year)  all the more compelling.   Any errors are my own and I welcome suggestions for improvement.

Over many years, there was a notion, often repeated, that the Scarborough Amateur Radio Club was founded in “Barney’s Basement” and I thought it to be of sufficient importance to offer this accounting for the sake of clarity and  historical accuracy.

From oral and written sources it seems certain that the Founding Meeting took place on April 23, 1946 at the home of Ken Tripp Senior, located at 160 Scarboro Crescent close to the intersection of Kingston Road and Midland Avenue, Scarborough, Ontario. This was the first known record of the election of  Officers of the Club.

We learn further that Barney, VE3DFA (later VE3MB) and Eva, VE3DFC (later VE3EVA) Colleck were not present at the Founding meeting, but  became members very soon afterwards.   The Club met for a short time at 160 Scarboro Crescent then moved to Oakridge Public School, 110 Byng Avenue, Scarborough (Danforth Avenue and Pharmacy Avenue area) and then on May 11, 1948 the club met for the first time at Barney’s place of business, (2464 Kingston Road, West of Midland Avenue, North side) or in “Barneys’ Basement”. (see Dah-Dit-Dah, Vol 1, No 3 of May, 1948). 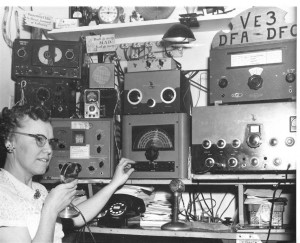 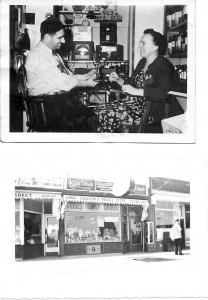 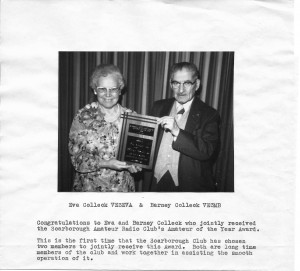 There is no doubt that Scarborough ARC had many productive and fun-filled meetings hosted by Barney and Eva and that the Club continued to grow rapidly.

On a personal note, I recall my first meetings at Scarborough ARC, ca. 1956-7, were held on Civic Road, in the military “H” Huts that were on the site of GECO the firm that manufactured munitions during WWII.   Civic Road is one short block South of Eglinton Avenue East, and runs parallel to Eglinton Avenue Eastwards from Warden Avenue.   This is the present day site of the Metro East Detention Centre.