These catalogues date to 1982 - 1984 and tell us much about the state of the art of Canadian Ham Radio equipment and prices in that era.

These catalogues were purchased from "Mario the Tube Man" at the Durham Hamfest of April 18, 2018.

This copy of Radio was kindly provided from the personal collection of Harvey Porter, VE3LLO.

Further information about this publication or publisher would be welcome.

Ray, VE3ZXC found an archive of RADIO Magazines at AmericanRadioHistory.com.

The Canadian Amateur Radio Federation was founded 1967 as a federation of provincial amateur radio organizations. In the 1970s the CARF reorganized and began allowing individual radio amateurs to join. CARF published a magazine called The Canadian Amateur for several years beginning in 1973.

CARF merged with the Canadian Radio Relay League in 1993 to form Radio Amateurs of Canada.

Thanks to Dale Olson VE6QDO and the Calgary Amateur Radio Association for the copies of The Canadian Amateur.
END_OF_DOCUMENT_TOKEN_TO_BE_REPLACED

The addition of QST Canada magazine to this website is in my view, a significant addition to the history of Canadian amateur radio as it relates to the formation of our present national and international advocacy organization, Radio Amateurs of Canada Inc.

To the best of my knowledge, this is the first time that QST Canada will appear on-line for all to see and read.

Amateur Radio is well organized both nationally and internationally and that has made it possible for our 'technical hobby' to continue, grow and prosper.

Many thanks go to Mr. Harry MacLean, VE3GRO, of London, Ontario who kindly loaned me his complete collection of QST Canada for re-publication on the world wide web at Long-Delayed Echoes. Harry was a senior official of the Canadian Radio Relay League Inc. and served with distinction including holding the post of Editor of QST Canada for its entire run.

On behalf of Canadian 'Hams' I thank Harry for his service to the hobby and for the loan of his complete collection of QST Canada.

Thanks to Harvey Porter VE3LLO for the loan of the June 1988 inaugural issue of QST Canada.

END_OF_DOCUMENT_TOKEN_TO_BE_REPLACED

Almost since the birth of Amateur Radio, the American Radio Relay League (ARRL) has been virtually synonymous with Radio Amateurs and short wave development. The late Hiram Percy Maxim founded the American Radio Relay League in 1914, and today is one of the largest Amateur organizations in the world. It has become the spokesperson for Amateur Radio in the United States, and for the most part in Canada until January 1, 1988. At this time the Canadian Radio Relay League (CRRL) became completely independent from the ARRL. The ARRL is an organization BY and FOR AMATEURS. Its members elect a Board of Directors that manage the affairs of the League, which publishes the magazine QST on a monthly basis. The ARRL own and operate Amateur Radio Station W1AW, which carries bulletins on many frequencies and different modes. The ARRL also publish annually the Radio Amateurs Handbook along with many other publications.

The ARRL have a large Field Organization that covers the United States with Section Managers, Section Emergency Coordinators, Section Traffic Managers, Emergency Coordinators, Official Observers, Official Bulletin Stations and many other appointments in each ARRL Section. The ARRL sponsor many sought-after operating awards and certificates such as the DXCC Award, WAS, VUCC, VHF/UHF Award and many others too numerous to mention here. Further information on these and others are available from ARRL Headquarters, 225 Main Street, Newington, CT. 06111-1494 USA and the ARRL website.

The Canadian Radio Relay League (CRRL) was founded in 1920 to serve Canadian Amateurs. The CRRL was a Division of the ARRL with one Director who sat on the ARRL Board of Directors. The CRRL incorporated in 1979 as a self-governing and self-administering division of the ARRL. At this time CRRL managed the Canadian sections. On January 1, 1988 the Canadian Radio Relay League became autonomous and had their own Officers and a seven (7) member Board of Directors elected by CRRL members. CRRL maintained the Canadian Field Organization with the same structure as ARRL. The members of the League elected a Board of Directors that managed the affairs of the CRRL, which published the magazine QST Canada on a monthly basis. They published a Study Guide for Radio Amateur courses, a Canadian Call Book Directory and other operating aids for Amateur Radio operators. They sponsored the CRRL Central Incoming and Outgoing QSL Bureaus. They were also the Canadian representative and voting member of the International Amateur Radio Union (IARU), and paid annual membership dues for all licensed Canadian Amateurs whether CRRL members or not.

The Canadian Amateur Radio Federation (CARF) was founded in 1967. Basically, the formation of CARF was a Federation of provincial organizations until the early 1970s. At this time reorganization took place that allowed individual members to join the National Organization. CARF published a magazine called The Canadian Amateur. They also published many operating aids, a Canadian Amateur Call Book and Study Guides for Radio Amateur courses across the country. CARF sponsored a number of Department of Communications (DOC), now Innovation, Science and Economic Development Canada (ISEDC), symposiums across Canada, which brought together Amateur Radio operators and department officials for communications in Canada. This liaison created a mutual understanding for Amateur Radio operators' concerns.

Radio Amateurs of Canada (RAC) was formed on May 3, 1993 when the CRRL and CARF merged after several years of discussion between the two National Organizations. RAC is a Not-For-Profit Organization incorporated within Canada. When CRRL became completely autonomous in 1988, this more than caused confusion for Canadian Radio Amateurs when deciding which organization to support. Both the CRRL and CARF were duplicating many services, which was a waste with a country having so few Amateur Radio operators. After much deliberation on the parts of both former organizations, a new National Organization for all Canadian Amateurs now represents all of the things that CARF and CRRL had done in the past. The best from both Organizations were implemented on May 3, 1993 and continue to grow with membership support.

The main services of RAC consist of a National magazine called The Canadian Amateur, published bi-monthly, the Field Organization that maintain supplies, certificates, and management of the Amateur Radio Emergency Service and the National Traffic System in each Section managed by Section Managers elected by RAC members. Study Guides for Amateur Radio courses are continually being improved for today's needs. RAC is also the voting member of the IARU.

RAC Members can voice their concerns through a Board of seven (7) elected Directors across Canada. The Board of Directors elects a slate of Executive Officers for day-to-day management of the Organization, which includes an Office Manager. The RAC administration office is in Ottawa, ON. This location provides close liaison with Innovation, Science and Economic Development Canada (ISEDC) officials in Ottawa. Please consider joining RAC, the only single National Amateur Radio Organization in Canada. Membership support is needed more than ever with the many issues that face Amateur Radio today. For further information contact the RAC Administration office at 720 Belfast Road, Suite 217, Ottawa, ON K1G 0Z5, the RAC website, your Regional Director or Deputy/Assistant Directors in your area.

Public service is an activity where Radio Amateurs assist other groups in the community by using their radio equipment and personal skills to provide two-way, radio communications during an event. Such events include: fun-runs, charity walks, emergency preparedness and so on. This section of the website includes documents from the past showing how Radio Amateurs contribute to the betterment of society. 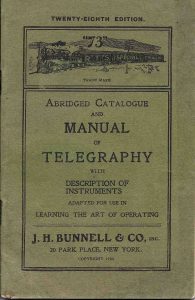 The catalogue that you see here was published in 1900 by the J. H. Bunnell Company and has been included on this website to highlight the fact that Amateur Radio has its roots firmly planted in the creation of the telegraph, or also known as signalling with electricity.

The earliest electrical telegraphs originated in Europe and were improved upon by Samuel Finley Breese Morse and his colleague, Alfred Vail. The first successful demonstration of Morse's telegraph was held on May 24, 1844 using a 38 mile line running from Washington, DC to Baltimore, Maryland. The first message sent over that wire was, in code, "What hath God wrought?"

By 1900 there were about sixty manufacturers of telegraph equipment in North America and J. H. Bunnell was probably the most prominent. How many aspiring Amateur Radio Operators learned Morse code on a Bunnell key ?

Note the use of "73" and the format of telegraphic messages, still in use today.

From the telegraph to radio, radar, telephone, television, fax, the internet and .......?

The attached photos are from the collection of a member of the Haslett family and are published with their kind permission.

One of the photos contains a pennant with the words: "North Bay, 7th N. Ontario Hamfest, July 1, 1954." According to this account by Gil Frederick VE4AG the hamfest began in Kirkland Lake in 1947, then moved to Sudbury, and then to North Bay. The Northern Ontario Hamfest still exists to the present day, sponsored by the Sudbury ARC.

Sure looks like the gang and their families had some fun.

Skywire began its life ca. 1948 and it was "Published monthly as: The Official Organ of The Montreal Amateur Radio Club of Montreal, Canada", edited by Mr. Fenwick Job, VE2TH, with a business address of 284 Guilbault Avenue, Longueuil, Quebec.

The earliest copy on hand is March 1949, Volume 2, No. 3, and was kindly supplied by Jim Walsh, VE3IOM of Orillia, Ontario.

By October 1949 Skywire was "Published monthly as THE CANADIAN RADIO AMATEURS JOURNAL" and no longer affiliated with the Montreal Amateur Radio Club.

Mr. Job was also involved in commercial broadcasting and in 1953, along with others, started CFJB-AM, (Canada Fenwick Job Brampton) on 1090 kHz running 250 watts, now CIAO-AM. For more details, see: CIAO-AM history at the Canadian Communications Foundation.

Skywire contained advertisements of considerable interest and information to "Radio Men" for equipment and parts of all kinds, news, technical topics, club and hamfest activities, and "on-the-air" operating along with "for sale" and "wanted" advertisements. The format was 7" wide by 8 1/2" long and about 36 pages per issue including covers.

Skywire does illuminate the ongoing developments in the state of the radio art from a Canadian perspective and makes for very interesting reading.

Since Mr. Job died in a car crash in 1956, and the most recent copy of Skywire on hand is June 1953, it seems probable that there may be other Skywires out there waiting to be found. Please contact me if you have or find issues later than June 1953.

END_OF_DOCUMENT_TOKEN_TO_BE_REPLACED

According to a column by Bill Choat, VE3CO, published in The Ontario Amateur, Vol. 1, No. 2, June 1966 pp 17 & 18, The Canadian Amateur was published by John H. Brown, VE7JB, North Surrey, British Columbia. I would appreciate any further information about this organization. (See Radio Society of Ontario section of website.)

Doug Leach VE3XK forwarded all ten issues of The Canadian Amateur published in 1959 and 1960. Thanks to Michael Kelly VE3FFK for the scans.

Please see page 12 in the March 1959 issue for a letter from me to the Editor.

In May 1993, CARF and the "Canadian Radio Relay League" (CRRL) merged to form "Radio Amateurs of Canada". The first RAC National Convention was hosted by the Calgary Amateur Radio Association on July 22-24, 1994.