On May 22, 1957, the Letters Patent incorporating the Ontario Amateur Radio Federation, Inc. was issued to Noel B. Eaton, VE3CJ, D. Alan Page, VE3XZ and A.K. Meen, VE3RX ( then VE3DAR ).  The organizational meeting of the Corporation was held in October, 1957, with Noel Eaton elected as the first President.  The by-laws of the Federation as then established provided for membership by recognized amateur radio clubs only, these clubs being represented at meetings of the Federation, each by a Trustee and an alternate Trustee. The clubs forming the original membership of the Federation were Oakville, North Shore, Metro, Westside, Wireless Association, and Nortown.These were subsequently joined by Peterborough, Brantford, Niagara Peninsula, Scarboro, Skywide and Hamilton. The Federation had annual and semi-annual meetings of the Trustees, and monthly meetings of the Executive Committees.   Considerable progress was made in the area of television interference, both diagnosis and treatment, and in submissions which ultimately resulted in the substantial improvement of television sets by the incorporation into all sets of a high pass filter, beginning with the 1961 model year.

At the semi-annual meeting of the Trustees in the fall of 1961 the Executive was authorized to explore the possibilities of amalgamation of the Ontario Amateur Radio Association and The Ontario Amateur Radio Federation, Inc. In April, 1962 as a result of these negotiations the two organizations were joined and the name was changed to Radio Society of Ontario, Inc. In the fall of 1962 the society sponsored the A.R.R.L. Ontario Section Convention.

In March, 1963, a By-law was passed which converted the membership in the Society from Clubs to individuals, and divided Ontario into districts as administered by D.O.T. (Department of Transport), the districts having representation roughly proportional to the amateur population of each district.  Thus Clubs were no longer members with voting privileges, but rather might become affiliated clubs provided 50% of their voting members were members of the Society.

Membership has grown year by year, and at the present time stands well beyond the 1000 mark.

Thanks to Ralph Cameron, VE3BBM and John Gilbert, VE3CXL for providing the December 1966 and 1985-1986 issues of The Ontario Amateur. 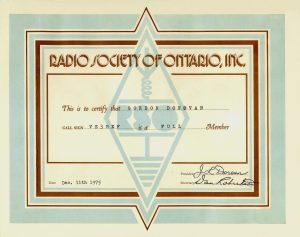 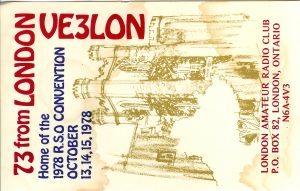 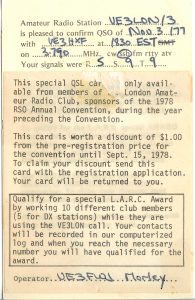 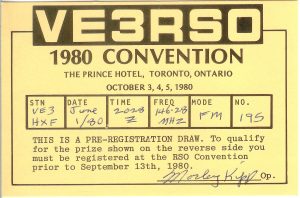 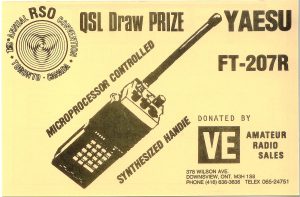